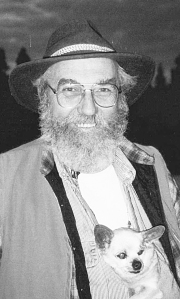 Terry Lee Liebe of Eureka died April 18, 2012, peacefully in his sleep next to the love of his life.

He was born June 24, 1940, in Cedar Rapids, Iowa, to Donald and Reba (Metcalf) Liebe. Terry was raised in Iowa and married his beloved wife Rose Marie Oct. 5, 1958, before moving west permanently. They spent 53 wonderful years as husband and wife. Together they raised their five children: Timothy Lee; Kelly Renae; Rory Joseph; Lori Marie; and Audra Lee.

Terry logged for 17 years and then opened a log furniture store in Lewistown.  He was a dedicated family man who always worked to support them and his hunting habit. He is known as a man who lived his life exactly the way he wanted.  Terry loved the outdoors, as evidenced by his home decor as well as the time that he spent in the pursuit and enjoyment of the creatures God made.

The family requests that remembrances be made to Terry’s favorite charity, St. Jude’s Children’s Hospital, in his name.

Arrangements are under the direction of Schnackenberg & Nelson Funeral Home in Eureka.

From: Obituary
Tobacco Valley News, Online →
No comments yet